This website was created to preserve the legacy of Herman “Winks” and Barbara Kettle Gundlach, maintain the history of our community, and to inspire the next generation of activists, feminists, and philanthropists.

From captain of the Houghton High School and Harvard University football teams to a captain of industry, Herman “Winks” Gundlach Jr. was a man of many passions. From 1946 until he retired in 1988, his Gundlach Construction company built many of the major structures in the Upper Peninsula. A humble man, Winks gave credit for many of his accomplishments to others. He revered the tradesmen of the area, and Winks stayed up late looking over his payroll, knowing that these names didn’t just represent employees, but local families.

A housewife, a mother, a Harvard alum, a feminist. These are all labels that could describe Barbara Kettle Gundlach. She was an able, intelligent woman whose competence covered a broad range of interests, including music, art, literature, religion, social ethics, and philosophy. You can read much more about her HERE. 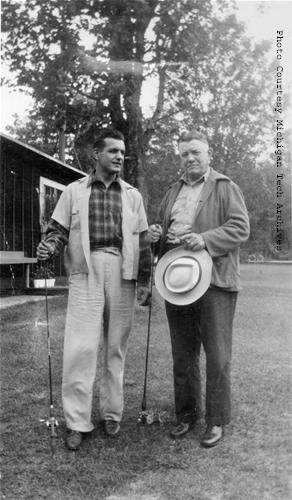 “Winks Gundlach was one of my Father’s best friends. They were one year apart and grew up together in Houghton going to the same schools. When Winks got the idea in his head to let women in to Rotary, my Dad was very much against it. He voted no and our club missed being the 1st club in the country by a couple of weeks or months because of this ongoing battle between Winks and my Dad.

“When I moved back to Houghton from being gone for 20 years, Winks would ask me every year if I would join Rotary? I would always say, ‘Well, You know how my Dad feels about that!’

“Finally in 2003, I asked my dad about me joining Houghton Rotary and he said, ‘I don’t care, I’m not a member anymore!’ So the day of my first Rotary meeting, Dad came to it and of course we sat with Winks. He introduced me to the club and told wonderful stories about my Dad and his Father before him that had been Houghton Rotarians and he was so grateful that Dad had let me become a 3rd generation Rotarian.

“One of the things that I remember most about Winks was his story telling and his generosity. He could always tell the best stories, but he would always ask everyone in the room to share their experiences and not take the spotlight himself. He always showed interest in the least likely of people. He was so sincere all the time.

“I used to take many photos at family and social gatherings that he would be at. He made sure that he would grab my camera and take pictures with me in the photos also. Just a fine and generous gentleman. I would probably not be a Houghton Rotarian if it weren’t for Winks. I think of him often, he is surely missed.”

“Dad had the marvelous capacity to understand his insignificance in the universe, in the sight of God, while at the same time exerting whatever mortal power he could muster in his own little village.”

Besides being a successful businessman, Winks was a prominent activist. Upon his death at age 91 in 2005, instructions were laid out about how to continue his legacy of giving back to the community he grew up in and worked in. Through the Herman Gundlach Fund, Winks continues to leave his mark on the community For Good. For Ever.

The Barbara Kettle Gundlach Shelter Home offers a safe place for victims of domestic violence and their children. They work to provide ways to access safety and support when escaping violence and abuse. Along with shelter, they offer counseling, advocacy, and referrals to other agencies in the community which work for or with those affected by domestic violence. Winks donated the shelter home facility in 1983, which was named after his wife, Barbara Kettle Gundlach.

Read to Ride is a Summer reading program for youth ages 6-14 throughout the western Upper Peninsula. The program encourages children to read during the summer months providing incentive by offering a prize drawing for each age-appropriate book a child completes. Each summer the program awards 20 Mountain Bikes to individual readers selected through the prize drawing.