“I saw Winks at the golf course one day and admired his golf cap because it was labeled for his company and had such a beautiful braid on the bill.  He accepted my admiration but said little else. We continued with our golf games. However, a few hours later, when I was sitting at home, there was a knock at my door. There appeared Winks’ house-keeper, Marie Savela, who said, ‘Mr. Gundlach asked me to give you this hat.’ I still cherish that hat to this day.”

Besides being a successful businessman, Winks was a prominent activist. Upon his death at age 91 in 2005, instructions were laid out about how to continue his legacy of giving back to the community he grew up in and worked in. Through the Herman Gundlach Fund, Winks continues to leave his mark on the community For Good. For Ever. 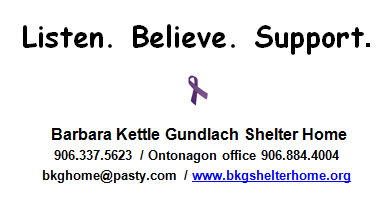 The Barbara Kettle Gundlach Shelter Home offers a safe place for victims of domestic violence and their children. They work to provide ways to access safety and support when escaping violence and abuse. Along with shelter, they offer counseling, advocacy, and referrals to other agencies in the community which work for or with those affected by domestic violence. Winks donated the shelter home facility in 1983, which was named after his wife, Barbara Kettle Gundlach.

Read to Ride is a Summer reading program for youth ages 6-14 throughout the western Upper Peninsula. The program encourages children to read during the summer months providing incentive by offering a prize drawing for each age-appropriate book a child completes. Each summer the program awards 20 Mountain Bikes to individual readers selected through the prize drawing.